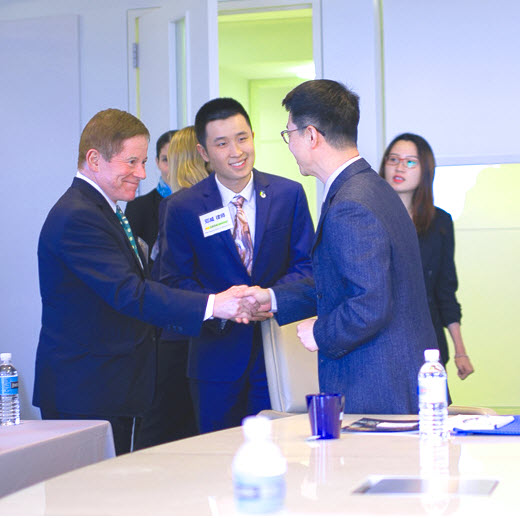 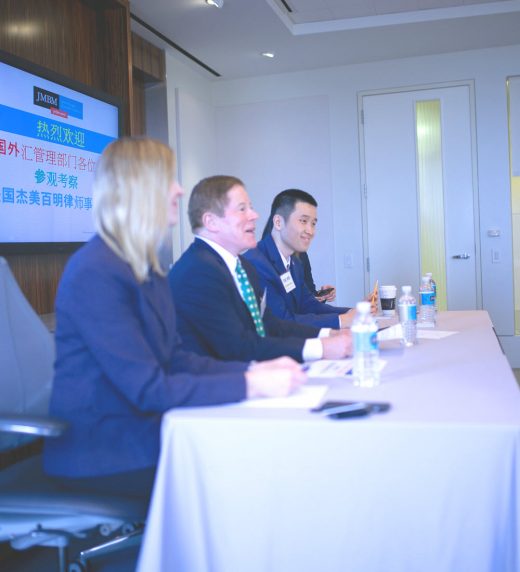 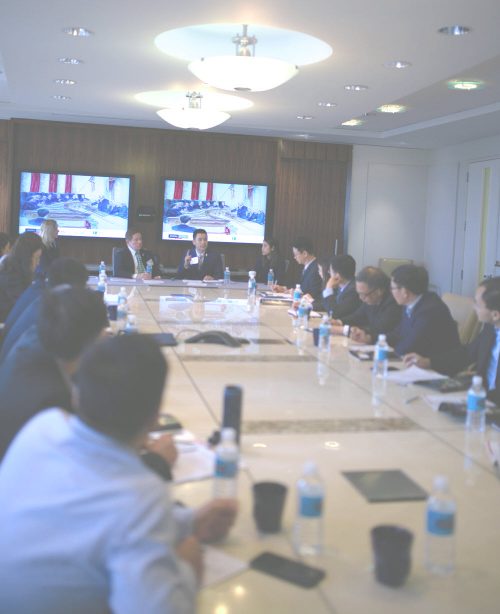 As the chairman of the Chinese Investment Group, Jim Butler answered questions about the American legal system.  In particular, Jim Butler used examples from the hotel industry to illustrate some of the costly pitfalls that Chinese investors should know about. 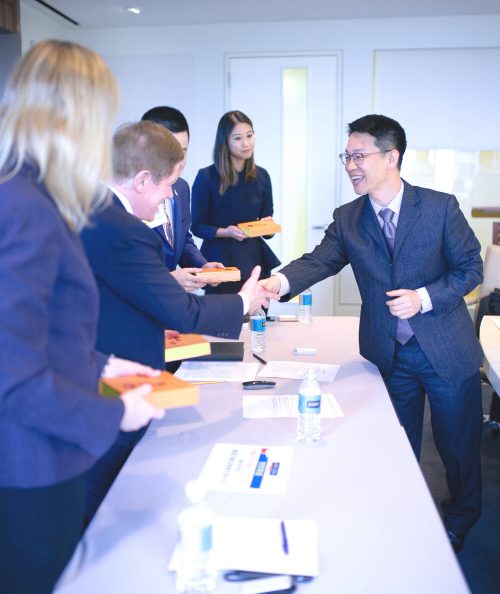 After the lecture, the head of the Chinese government officials highly praised the lecture.  He presented to Jim Butler and his team an exquisite present from China as a token of the delegation’s appreciation for the lecture. 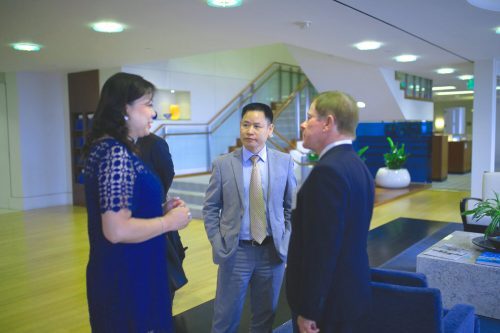 Later, Jim Butler had a friendly conversation with his old friends from Industrial & Commercial Bank of China (ICBC), the largest bank in the world.  In the photo above, on the right is Jim Butler.  In the middle is Shulin (Forest) Peng, head of ICBC North America FI Center.  On the left is Alice Gao, Vice President of ICBC. 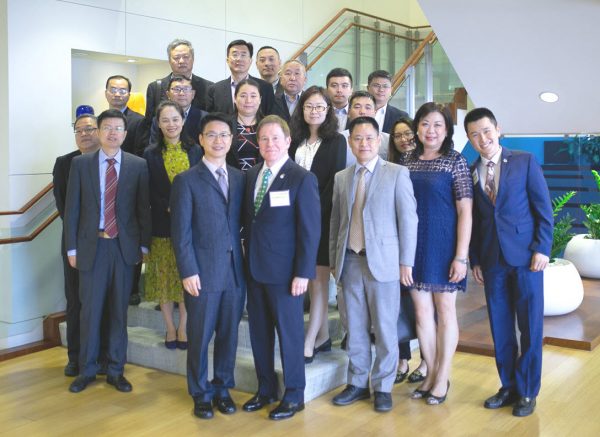 Jim Butler is recognized as one of the top hotel lawyers in the world. He devotes 100% of his practice to hospitality, representing hotel owners, developers and lenders. Jim leads JMBM’s Global Hospitality Group® — a team of seasoned professionals who have helped clients around the world with more than 4,300 hospitality properties worth more than $104.7 billion.
More

Robert Braun is a partner in JMBM's Corporate Department and a senior member of JMBM's Global Hospitality Group® -- a team of seasoned professionals who have helped clients around the world with more than 4,300 hospitality properties worth more than $104.7 billion. Bob represents owners in both transactional and operational issues. He advises clients with respect to business formation, financing, mergers and acquisitions, venture capital financing, joint ventures and strategic partnerships. He has represented hotel owners in the negotiation of several hundred management agreements, as well as spa management and franchise agreements. Bob also advises hotel owners regarding telecommunications, software, internet, e-commerce, data processing and outsourcing agreements. To read Bob's articles, go to www.HotelLawBlog.com and select "Management Agreements." For more information, please contact Bob Braun at 310.785.5331 or rbraun@jmbm.com.

Marta Fernandez is a partner in JMBM's Employment and Labor Department and a senior member of JMBM’s Global Hospitality Group® -- a team of seasoned professionals who have helped clients around the world with more than 4,300 hospitality properties worth more than $104.7 billion. As a management labor lawyer with more than 20 years of experience, Marta specializes in representing hospitality industry clients in all aspects of labor and employment including labor-management relations such as union prevention, collective bargaining for single as well as multi-employer bargaining units, neutrality agreements and defense of unfair labor practice charges before the NLRB. She defends employers in administrative and litigation claims, such as employee claims of sexual harassment and discrimination and counsels clients in preventative strategies such as executive training, arbitration enforcement, and policies and procedures. To read Marta's articles, go to www.HotelLawBlog.com and select "Labor & Employment." For more information, please contact Marta Fernandez at 310.201.3534 or at mfernandez@jmbm.com.

Guy Maisnik is a partner in JMBM's Real Estate Department and a senior member of JMBM's Global Hospitality Group® -- a team of seasoned professionals who have helped clients around the world with more than 4,300 hospitality properties worth more than $104.7 billion. Guy's deep and broad transactional practice includes complex real estate finance and venture capital transactions, including project finance, commercial finance, leveraged leasing and real estate acquisitions. He assists clients with development, leasing and disposition, loan portfolio acquisitions, loan and debt restructure, workouts and real estate exchanges. Go to www.HotelLawBlog.com for current information in these areas. For more information, please contact Guy Maisnik at 310.201.3588 or mgm@jmbm.com.

David Sudeck is a Partner in JMBM's Real Estate Department and a senior member of JMBM’s Global Hospitality Group® -- a team of seasoned professionals who have helped clients around the world with more than 4,300 hospitality properties worth more than $104.7 billion. David has significant experience in the vacation ownership arena, focusing on the formation and registration of condominiums, timeshares and fractional interest regimes. He negotiates hotel, spa and restaurant management agreements, and assists client in the development, acquisition, sale and leasing of hotels, golf courses and restaurants. For David's take on current issues in the timeshare arena, go to www.HotelLawBlog.com and click on the topic, "Timeshare." For more information, please contact David Sudeck at 310.201.3518 or dsudeck @jmbm.com.

Robert Kaplan is a partner in JMBM's Bankruptcy, Insolvency and Restructurings Group and a senior member of the Global Hospitality Group® -- a team of seasoned professionals who have helped clients around the world with more than 4,300 hospitality properties worth more than $104.7 billion. Bob represents lenders, special servicers, hard money lenders, community banks, national banking associations, distressed debt investors, and equity investors, positioning them for the best possible outcome by acting expeditiously to preserve value and increase cash flow. His industry experience and his knowledge of the current capital markets -- where distressed assets often include complex deal structures and securitized loans -- allows him to bring creative and effective strategies to the table. When aggressive litigation is the best strategy, he is a vigorous and effective advocate for his clients. Bob represented the securitized lender in the Chapter 11 bankruptcy case filed by the Clift Hotel in San Francisco, and in the subsequent negotiations and successful sale of the loan to a third party. The lender -- acting by and through GMAC Commercial Mortgage Corporation as special servicer -- was the holder of a $60 million loan secured by a Deed of Trust on the Clift Hotel. He has also served as counsel to CapMark, J.E. Robert Company, Inc., AMRESCO Management Inc. and Midland Loan Servicer in their capacity as special servicers on troubled hotel loans in CMBS pools. For more information, contact Robert Kaplan at 415.984.9673 or rkaplan@jmbm.com.

Martin Orlick is a partner in JMBM's Real Estate Department and a senior member of JMBM's Global Hospitality Group® -- a team of seasoned professionals who have helped clients around the world with more than 4,300 hospitality properties worth more than $104.7 billion. Marty specializes in representing hospitality industry clients in Americans With Disabilities Act (ADA) compliance and defense. He has represented more than 500 businesses in ADA issues, many of them hotels and restaurants, as well as hotel mixed-use properties. Marty is a member of the American College of Real Estate Lawyers (ACREL) and a frequent speaker on the ADA and other topics. To read Marty's articles, go to www.HotelLawBlog.com

Travis Gemoets is an experienced trial attorney and represents management in all facets of labor and employment law, including wage/hour class actions, claims of discrimination, harassment, wrongful termination, trade secrets and unfair competition, union/management relations and workplace violence. He is a member of JMBM's Global Hospitality Group(r), in which capacity he negotiates union contracts and resolves labor disputes throughout the country, defends class action claims, develops strategies for the mass onboarding and separation of employees, and recommends proactive changes to employers' policies and practices in order to minimize potential liability risks. Reach him at 310.785.5387 or tgemoets@jmbm.com.

Mark S. Adams is an experienced trial lawyer and a member of JMBM's Global Hospitality Group® and Chinese Investment Group™. He focuses his practice on business litigation including contracts, corporate and partnership disputes, and hospitality disputes and litigation. On behalf of hotel and resort owners, Mark has successfully litigated the termination of long-term, no-cut, hotel management agreements, franchise agreements, fiduciary duty issues, investor-owner disputes, TOT assessments, and more. He has wide-ranging trial experience in a variety of commercial disputes, including complex multi-party litigation and class actions. He has tried numerous cases in state courts, federal courts, and in domestic and international arbitrations, and is a frequent author and speaker on trial practice. Mark's trial wins have been covered by Forbes, Reuters, and other publications. He has obtained two of California's annual 50 largest jury verdicts in the same year. Mark has taken or defended nearly 1,000 depositions throughout North America, Europe and the Middle East. He has been quoted as an expert on noncompete agreements in the Wall Street Journal. For more information, contact Mark at 949. 623.7230 or markadams@jmbm.com.

Jeffrey Steiner is a partner in JMBM's Real Estate Department and a senior member of JMBM's Global Hospitality Group® -- a team of seasoned professionals who have helped clients around the world with more than 4,300 hospitality properties worth more than $104.7 billion. He represents both institutional lenders and borrowers in connection with construction and permanent lending, loan work outs and restructurings, real estate development, design and construction contracts, real estate acquisitions and sales, preparation and negotiation of commercial leases on behalf of landlords and tenants, joint venture transactions and hotel management agreements, purchases and sales and financings. For more information, please contact Jeff Steiner at 310.201.3514 or jsteiner@jmbm.com.

Bennett Young is a partner in JMBM's Bankruptcy, Insolvency and Restructurings Group and a senior member of the Global Hospitality Group® -- a team of seasoned professionals who have helped clients around the world with more than 4,300 hospitality properties worth more than $104.7 billion. His clients include lenders, financial institutions, secured and unsecured creditors, distressed investment funds, businesses, receivers, special servicers and creditors' committees. Ben represented the owner of a partially completed multi-billion dollar resort property in the restructuring of its finances and has represented lenders to hotels and casinos. For more information, contact Ben Young at 415.984.9626 or byoung@jmbm.com

Sheri Bonstelle is a partner in JMBM's Government, Land Use, Environment and Energy Department, and a member of JMBM's Global Hospitality Group®. She represents owners and developers in land use, zoning, environmental, litigation and construction matters. She manages all aspects of the entitlement process, including representing clients before local and state agencies, commissions and councils. Sheri also represents clients in a variety of land use and real estate litigation matters in state and federal courts, including cases arising under CEQA and other environmental laws. Her hotel experience includes handling the adaptive reuse of an historic office building as a luxury boutique hotel. For more information, please contact Sheri Bonstelle at 310.712.6847 or SBonstelle@jmbm.com.

Kevin McDonnell is a partner in JMBM's Government, Land Use, Environment and Energy Department, and a member of JMBM's Global Hospitality Group®. Kevin represents developers and owners of hotels in a broad range of land use and zoning issues including entitlements, code enforcement, easements and parking requirements, as well as related Parcel Map and Tract Map subdivision issues. His hospitality experience includes hotels, condo-hotels and mixed-use projects. A registered Civil Engineer and Structural Engineer in California, and a former building official for the City of Los Angeles, Kevin brings unique experience and insight in Zoning and Building Code applications and Code Enforcement issues. For more information, please contact Kevin McDonnell at 310.201.3590 or kkm@jmbm.com.

Jamie Ogden is a tax lawyer at Jeffer Mangels Butler & Mitchell LLP. He advises individuals and businesses on a range of tax planning, tax controversy and estate planning matters. Jamie’s experience includes all tax aspects with respect to the hospitality industry, including acquisitions and dispositions (including Section 1031 exchanges), financing and management agreements. He also serves as lead tax counsel on M&A transactions, financing, internal corporate restructurings and deferred compensation matters. Jamie also works frequently with litigators on the tax aspects of litigation, judgments and settlements. Jamie has extensive experience with foreign compliance matters, including each variation of the IRS amnesty programs. In addition to his experience in private practice, Jamie also brings several years of service from both state and federal government. For more information, contact Jamie at JOgden@jmbm.com or 310.201.3510.

Wei Deng is General Counsel of Bosen American Capital, Inc. where in addition to his legal duties, he is responsible for sourcing, evaluating and proposing United States investment opportunities to the company. Wei was previously with JMBM, where he focused on transactional and litigation matters.

By Email
Search
Ask The Hotel Lawyer ™
Ask the Hotel Lawyer™ is a quarterly column that I write for JMBM's Global Hospitality Advisor®. If you have a question you would like to submit to Ask the Hotel Lawyer™ please use the comments box below. While your question may not be of sufficient general interest for the column, I will try to respond to you individually if you leave your contact information below.
Jim Butler.